I recently ordered myself a new rod and reel set up for lure fishing. A six and a half foot Daiwa Beefstick rod and an Okuma bait caster reel. After a few practice casts in the back garden I went out today to a local still water to try them out as The Trent is in full flow at the moment, the highest it's been for a long time.

The fishing started off without any interest at all in my lures from the pike but I didn't mind as I was just trying to get the hang of casting a bit of a distance without the reel tangling into a birds nest! After a while my casting eventually did improve and I was quite enjoying using the bait caster when I felt a knock on the lure, my shad came back without its tail... Well it was a start. I eventually hit into a pike and wondered how my new gear would cope but it felt good, the rod was soft enough to cope when the fish lunged for snags and the reel gave line nice and smoothly when the fish took off but they also had the power to beef the fish under control. Fish in the net and rod+reel christened!

Not long after I was into another one, this second fish was very similar to the first but it decided to do some acrobatics on the unhooking mat and made its own way back to the water before it could have its photo taken! HA!

Can't see me going back to a fixed spool bail arm reel for chucking lures, can't wait to get out again soon. 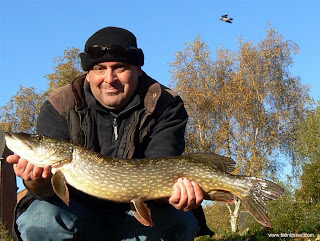 Nice photo. Glad the new outfit is working out well.

Hey, nice fish Daz!
You will get used to using the "thumb brake" on your new baitcaster...
I have an ABU 5501 multiplier, it would just about cast a 4" shad.. ENJOY!

Hi there, I found your blog via Google while searching for a related topic, your site came up, it looks good.