Rant mode on... I find it very disappointing that here we are in the 21st century with all the modern baits, tackle and knowledge that we have, and a lot of angling clubs still have outdated silly prehistoric rules that patronise their members, and the attitude of some club bailiffs... pfft, power trip angry little Hitler types especially if you're not one of the lakes regular bivvied up Carp lads.

This week I fancied a wander around a lovely big natural gravel pit, it's out of the way and perfect for a bit of peaceful fishing in tranquillity with nature. I'd been there about an hour and had already caught a couple of Jacks and had another couple come off but wasn't worried, just happy to be out fishing on my own in the middle of nowhere not bothering anyone, then I noticed a new bailiff approaching from behind. "Morning" I said with a smile "How are you doing?" only to be greeted with "NO BLOODY PIKE FISHING UNTIL OCTOBER!"  ...oh, not a very good first impression and my first impression of this chap was tosser. He asked if I was a member and seemed very disappointed when I eventually found my 'full member' card and even more annoyed when he asked to see a rod licence and I showed him a printed email receipt from earlier that morning. Ok so I was bending the club rules by flicking out a small lure before October but it's only a bit of fishing! Not the crime of the century. It seems that some clubs want to make things difficult for its members especially if they're not static carpers or barbel lads.

Other silly rules from my local fishing clubs include: No bite alarms??? What century are we in! But the one that rattles me most is the 'no artificial lures or spinners' rule because lures and spinners are apparently damaging to the birds/water foul. Well in all my years of fishing I've had more water foul incidents whilst Carp fishing than I've ever had while lure fishing. Whilst Carping I've lost count of the times I've seen ducks diving under picking up boilies and even baited hooks! I've lost count of the number of times I've seen them swim through lines and sometimes even get tangled, not the ducks fault, we're in their habitat. But not once have any of my 'artificial lures or spinners' ever come close to bothering any water foul.

Most anglers who have paid out for club membership and licence fees are adult enough to be responsible for their own fishing without being treated like idiots by outdated club rules and little Hitler type committee members who are still living in Izaak Walton’s era... *deep breath ... Calm down... Rant over.

After a bit of a lay off from fishing I'm glad to say I'm now back and enjoying chucking out a few lures for the Pike (where allowed.) Although I've only been catching Jacks it's good to be out with renewed enthusiasm again. I've been out throwing lures this week, had a few Jacks and a surprise little Zander. 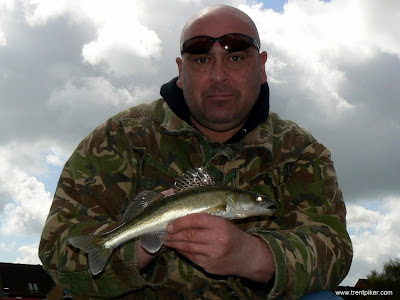 Well done on your catch Daz, I help bailiff our clubs rivers, And the carp and barbel crue get my back up at times with the latest thing being they should let pike have a rest period, So i lost it and gave them the "next thing you know they will be shuting the rivers for 3 months of the year and calling it closed season" If i came accross you fishing for pike i would just say hi mate how you doing and carry on, They should know that a guy with your expierience knows what they are doing, If he was my under bailiff ide sack the F@@ker,
All the best hope your enjoying your fishing,
And by the way the "Water watcher" Bailiff cant ask for your rod licence he has no right unless he works for the environment agency,
Stay Lucky,
,,,Paddy,,,